The MuSIASEM approach can be used as a diagnostic tool in which it generates a multi-scale integrated representation of the energetic metabolic patterns of societies.  This implies developing a specific grammar to be used for the accounting of the fund elements (human activity, land uses and power capacity) in relation to the different forms of energy use within societies.

The grammar involves tracing the incoming biophysical inputs into the different energy flows (as indicated by mechanical energy and thermal energy) until the six functional sectors required for the functioning of a modern society:

* Characterization of Primary Energy Sources (PES) and Imports – refers to the energy forms found in their original biophysical form (e.g. coal, gas and oil reserves, blowing wind, falling water, sun radiation, and biomass) that should be expressed in biophysical quantities such as tons of Coal, tons of falling water for hydro, kg of uranium, etc.) that generate the supply of energy carriers used by societies.  The original role of PES is to indicate the requirement of favourable gradients which must be available, in order to be able to produce an adequate supply of energy carriers (entering into the system from the left of the figure). This determinant indicates the supply side limitations.

* Characterization of Gross Energy Requirements (GER) – the gross requirement of energy carriers are determined by the potential domestic supply of energy carrier generation either from the PES sources or from Imports, usually expressed in Giga Joules (GJ-GER).  The formalization of GER results from a convention over the energy potential of each source that depends on (1) the type of conversion process they are entering into, and (2) the type of energy carrier they are used to produce (either mechanical energy or thermal energy).  It corresponds to the total energy throughput taken from the natural processes either locally or through imports.  It is obtained after the conversion losses (energy carriers used to make other type of energy carriers – e.g. electricity generation) have been characterized (the internal loop labelled “Hypercycle Part” in the figure).

* Characterization of Net Supply of Energy Carriers (NSEC) – the net supply of energy carriers (expressed in GJ-EC) differs from the GSEC by accounting for the distribution losses (in the middle of the figure).

* Characterization of End Uses – inside the DISSIPATIVE part are illustrated six vectors defining the characteristics of End Uses in the functional compartments that use the net surplus of energy carriers delivered by the HYPERCYCLE part.  That is for each functional compartment we can define a vector determining what types and amount of energy carriers (EC) – e.g. mechanical energy (electricity, expressed in GJ-EC) and thermal energy (fuel and heat, expressed in GJ-EC) – are used together with an assessment of how much power capacity (PC, expressed in GW of installed capacity) and human activity (HA, expressed in hours per year).  These vectors highlight the demand side limitations.

An example of a grammar for the analysis of energy flows is provided in the figure below. 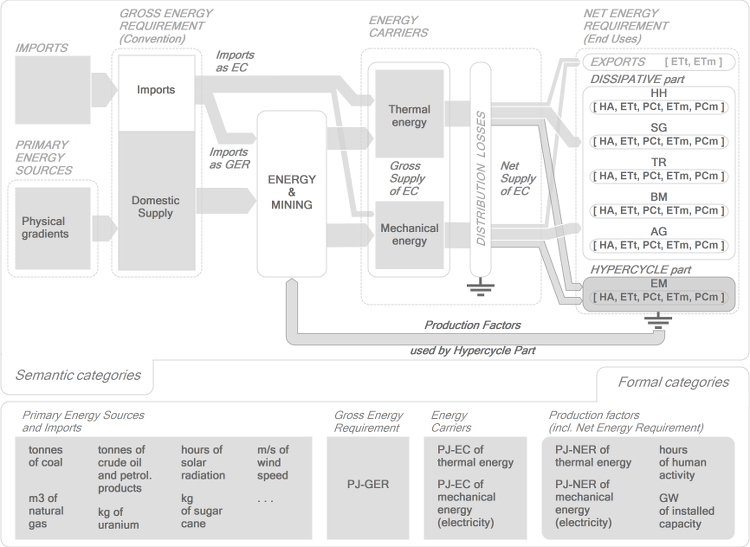 An example of grammar to characterize the energy* flows in the multi-level matrix (by F. Diaz-Maurin)
(*exosomatic energy flows are under human control and converted outside human body)

Benchmarks characterizing the typology of metabolic pattern can be obtained by dividing the total amount of energy flows and fund elements – at the level of the whole society (SA, corresponding to the sum of the DISSIPATIVE and HYPERCYCLE parts) – and then at the level of individual functional compartments: Household (HH), Services & Government (SG), Transport (TR), Building & Manufacturing (BM), Agriculture (AG) and Energy & Mining (EM).  The metabolic pattern is obtained by generating dendrograms of split of both fund and flow elements across hierarchical levels.  In semantic terms, this means selecting a set of useful and robust narratives about “what the society is” and “what the society does” in the quantitative representation of energy flows and fund elements.

An example of the metabolic patterns of the European Union 14 countries for the year 2007 can be seen in next figure, expressed in terms of Net Energy for the agricultural sector (AG), productive sectors (BM + EM) and service and household sectors (TR + SG + HH).